In keeping with Jaeger-LeCoultre’s eternal quest for precision, the Manufacture’s engineers and watchmakers have created a new complication that reproduces the true cycles of the Earth, Sun, and Moon more closely than ever before, developing it specifically for the Atmos Hybris Mechanica Calibre 590. The extraordinary mechanism brings an entirely new dimension to the Atmos – the unique perpetual clock that runs on air – displaying, in three dimensions and in real time, the relative positions and movements of Earth, the Moon and the Sun.

Nicknamed the Atmos Tellurium, this is the most complex Atmos clock ever created, pushing the limits of both precision and design, and the intricacy and architectural beauty of its movement naturally inspired the artisans of Jaeger-LeCoultre’s Métiers Rares® atelier. Dedicating a wide range of their craft skills to its decoration – from miniature-painting and laser-engraving to lacquer-work and meteorite inlay – they have elevated the Atmos Hybris Mechanica Calibre 590 to become a sublime work of art as well as an outstanding timekeeping device.

· Pushing the boundaries of precision and design, the Atmos Hybris Mechanica Calibre 590 is the most complex Atmos clock ever created, requiring more than four years of research and development work

· New Calibre 590 incorporates a complication that reproduces the true cycles of the Earth, Sun, and Moon

· The artisans of Jaeger-LeCoultre’s Métiers Rares® atelier dedicated a wide range of craft skills to its decoration, transforming an outstanding timekeeping device into a sublime work of art 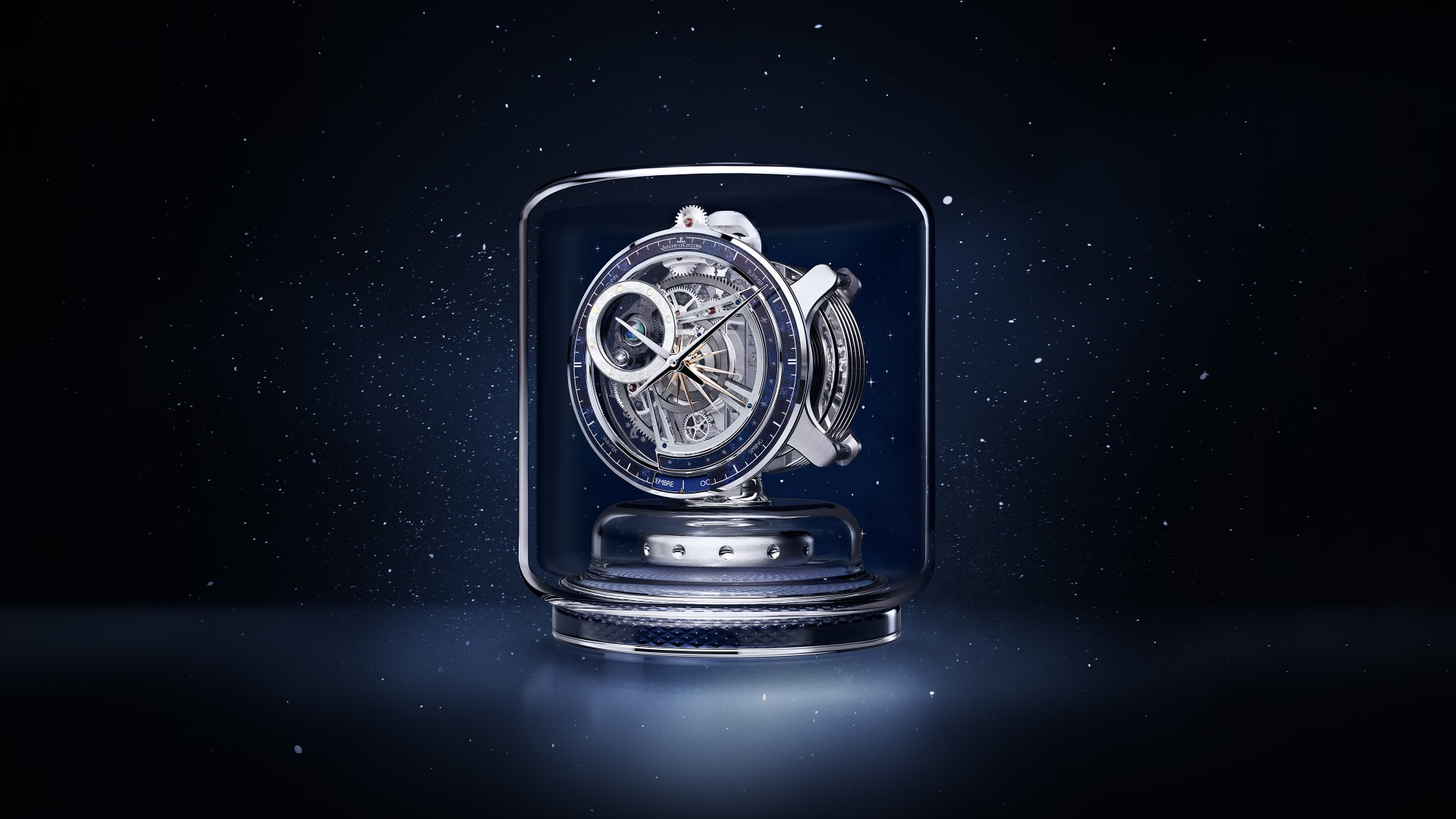 Measuring Time as the Planets Move

In the very beginning, thanks to the movements of stars and planets, mankind became aware of the passing of time and began to define and measure it. Days, with periods of light and darkness, were defined by one complete rotation of Earth on its axis; years were defined by the time it takes for the Sun to return to the same position in the sky, completing a full cycle of seasons.

Over the millennia, scientists invented instruments to reproduce these cycles and enhance their understanding of celestial phenomena. Clock-makers began to measure time by using the values of the various astronomical cycles – although the units of standard civil time are only approximate, based on the average values of solar, lunar and sidereal cycles. In 1543, Copernicus revolutionised scientific thinking with the publication of his heliocentric model of the solar system (first hypothesised by the Ancient Greek astronomer Aristarchus of Samos, the model had been discounted for more than 1,500 years in favour of an Earth-centred model).  The heliocentric model places the Sun, rather than Earth, at the centre of our solar system and its publication triggered the invention of the tellurion (also written as tellurium), a three-dimensional mechanical mobile that illustrates the relative positions and movements of Earth and the Moon in relation to the Sun. From the 18th century onwards, elaborate clocks were sometimes surmounted by these fascinating mechanisms. The nickname of Calibre 590 –‘Tellurium’ – is a tribute to those magnificent clocks.

Invented in 1928, the Atmos needs no human intervention to wind its movement; a temperature variation of just one degree Celsius provides sufficient energy to wind it for 48 hours, enabling it to run perpetually if kept under normal everyday conditions. Because this remarkable system produces only a small amount of energy – some 40 times less energy than a traditional 4Hz watch movement typically offers – the Atmos movement has been designed to consume as little energy as possible, with the balance taking one minute to perform a complete oscillation.

Over time, Jaeger-LeCoultre’s watchmakers have mastered the challenge of adding functions to the mechanism without substantially increasing energy consumption. In doing so, they have discovered that the complications best suited to the Atmos are those based on longer cycles, such as the seasons, months and phases of the moon.

A New Complication and a Captivating Display

The new Calibre 590 was entirely conceived, designed and constructed within the Manufacture Jaeger-LeCoultre and assembled in the Atmos atelier, a workshop solely dedicated to Atmos. Comprising 443 components, with the tellurium complication fully integrated into the movement, it required more than four years of research and development – its technical complexity and sophistication naturally meriting a place in Jaeger-LeCoultre’s Hybris Mechanica collection. As well as reproducing with precision the rotation of Earth on its own axis, and the orbits of the Moon around Earth and Earth around the Sun, the new calibre indicates the corresponding months and seasons with a zodiacal calendar.

The clock face is defined by a peripheral ring formed of two layers. The upper layer, fixed in place, is marked with an hour-and-minute track and the names of the seasons; this conceals a mobile ring marked with the months, which appear in an aperture at 6 o’clock. Set within this frame is a disc of translucent blue sapphire crystal, laser-engraved with the zodiac signs. At the centre of the dial, the sun is represented by a burst of polished golden metal rays.

Close to the peripheral ring, balanced by a wedge-shaped counterweight, a circle of meteorite frames a transparent sapphire disc into which a spherical Earth and Moon are set. The Earth rotates on its axis in 24 hours, the length of a civil day, providing a night-day indication as it revolves. At the same time, the Moon orbits Earth in one synodic month, turning on its own axis to show its phases. Defined by one complete cycle of moon phases, a mean synodic month is 29 days, 12 hours, 44 minutes and 2 seconds in length. This mean (or average) duration allows for the slight variation caused by the elliptical shape of the Moon’s orbit. The mechanism of the Atmos is so close to this mean that it creates only one day of error in 5,770 years.

This entire Earth-and-Moon disc orbits around the central Sun, making a complete rotation in one solar (or “tropical”) year, indicating the seasons as it turns. Jaeger-LeCoultre’s watchmakers have succeeded in establishing a cycle of 365.2466 days. This is so close to the reference value of 365.2425 days found in the Gregorian calendar that it varies by only one day in 390 years, meaning that it will not need adjusting until the year 2412 (the only adjustment is the seasonal change).

‘Fully visible from every angle, the entire mechanism seems to hover in space within its cylindrical cabinet of glass. In fact, it is supported, and attached to the base by a virtually invisible glass cloche, which also encloses the annular balance. Like the main body of the movement, the balance also seems to floating as it performs its slow and mesmerising dance.’ explains Lionel Favre, Jaeger-LeCoultre Design Director.

Naturally, this extraordinary mechanism has inspired the artisans of Jaeger-LeCoultre’s Métiers Rares® atelier to dedicate a wide range of their craft skills to its decoration. Miniature painting adds detail and depth to the spherical Earth; laser engraving evokes the surface of the Moon; lacquer brings a rich glow to the main dial ring; and meteorite – material that has literally fallen from space – is inlaid on the Earth-Moon ring; and the glass cabinet has been hand-painted with a delicate rendering of the constellations.

The most complex Atmos clock ever created, the new Atmos Hybris Mechanica Calibre 590 pushes the limits of precision and design a step further with a perpetual mechanism complemented by a tellurion that perpetuates time to almost infinity. It showcases this remarkable achievement in the form of a true work of art.