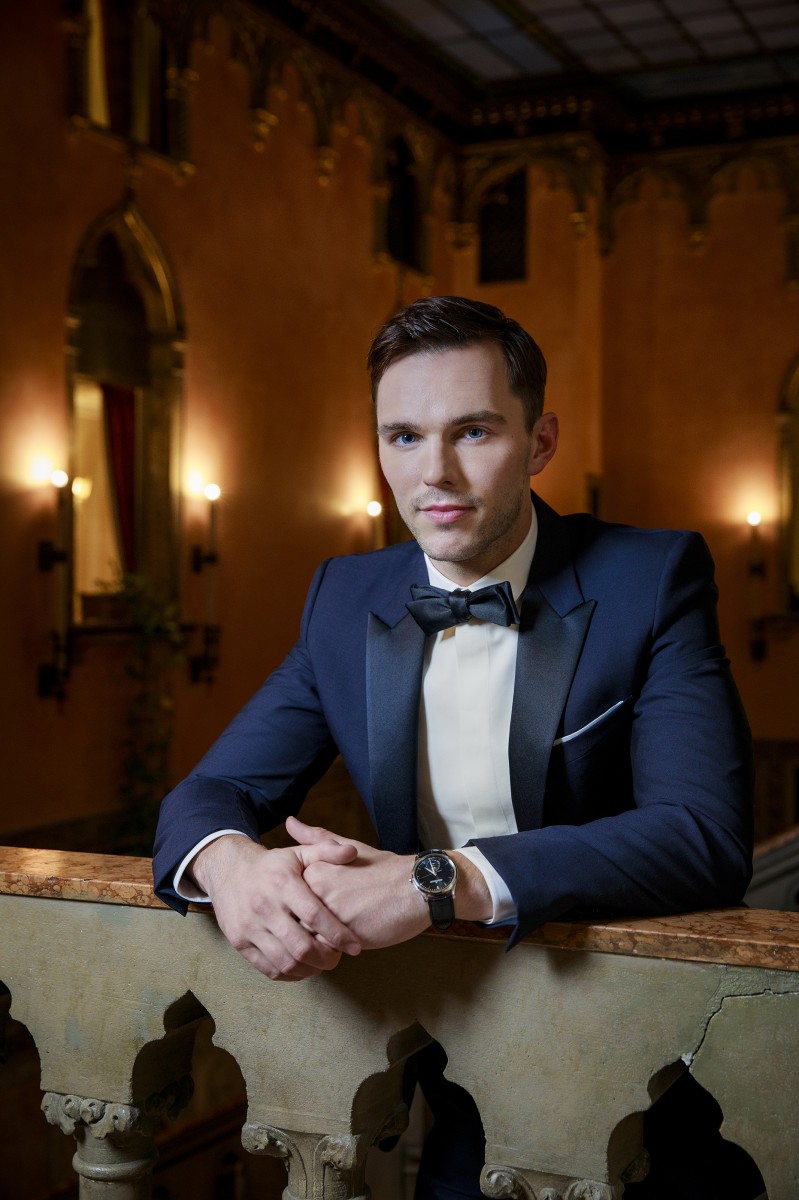 Jaeger-LeCoultre is thrilled to welcome the British actor Nicholas Hoult to SIHH 2019, where he will experience ‘The Art of Precision’.

Nicholas will also have the opportunity to visit the Jaeger-LeCoultre Manufacture in Le Sentier, in the heart of the Vallée de Joux, Switzerland. He will discover the workshops of the Grande Maison, including the Watchmaking Specialties workshop, the Rares Handcrafts (Métiers Rares) and the Atmos workshops, and witness the 180 skills of the master artisans.

Within the Watchmaking Specialties workshop, the place where Complication and High Complication movements are assembled, he will have a chance to talk with Jaeger-LeCoultre’s master-watchmakers about the specific characteristics of assembling the movements driving the High Complication pieces of the Brand, including the SIHH 2019 novelties.

As an official partner of the Venice International Film Festival, Jaeger-LeCoultre had the pleasure to meet Nicholas in Venice in 2015, and to dress him with a Jaeger-LeCoultre timepiece on the red carpet before the screening of EQUALS directed by Drake Doremus.

At the 2018 Venice International Film Festival, Jaeger-LeCoultre dressed Nicholas for the red carpet and screening of THE FAVOURITE, directed by Yorgos Lanthimos, with an elegant Master Ultra-Thin Moon.

The film was nominated for the Best Motion Picture - Musical or Comedy category at the 2019 Golden Globes.

Nicholas Hoult has become one of Hollywood’s most sought after actors. Known for blockbuster films like the X-MEN franchise as well as for independent projects like A SINGLE MAN. His upcoming projects reflect this agility with appearances in international franchises as well as character-driven dramas.

Hoult will next be seen reprising his role as ‘Hank McCoy/Beast’ in X-MEN: DARK PHOENIX.

He recently starred in the Fox Searchlight Pictures historical drama THE FAVOURITE alongside Emma Stone and Rachel Weisz. The film is a tale of royal intrigue, passion, envy, and betrayal in the court of Queen Anne during the early 18th century England. He also recently wrapped production on the biopic TOLKIEN, playing the titular character opposite Lily Collins.

Last year, Hoult was seen as J.D. Salinger in the Salinger biopic REBEL IN THE RYE, directed by Danny Strong from his own screenplay, which premiered at the Sundance Film Festival. Also premiering at Sundance was the Drake Doremus’s drama NEWNESS, a film set in contemporary Los Angeles about two millennials (Hoult and Courtney Eaton) navigating their relationship in a social media-driven hookup culture.

In 2016 he reprised his role as ‘Hank McCoy’ AKA ‘Beast’ in X-MEN: APOCALYPSE, the ninth installment of X-MEN which is directed by Bryan Singer. Previously he appeared in X-MEN: FIRST CLASS and X-MEN: DAYS OF FUTURE PAST alongside an all-star cast including Michael Fassbender, Jennifer Lawrence and James McAvoy. He also starred opposite Kristen Stewart in EQUALS, a futuristic love story set in a world where emotions have been eradicated, directed by Drake Doremus.

In 2015 he starred as ‘Nux’ opposite Charlize Theron and Tom Hardy in George Miller’s MAD MAX: FURY ROAD, which received multiple Oscar nominations including “Best Picture.”

A few years ago, Daniel had the pleasure to visit the Jaeger-LeCoultre Manufacture in the heart of the Vallée de Joux, Switzerland. He was impressed by the savoir-faire of the Grande Maison’s master artisans, especially in the Rares Handcrafts and High Complication workshops.

Jaeger-LeCoultre also welcomed Daniel at their Gala Dinner to celebrate the Art of Filmmaking at the Venice International Film Festival in 2015, 2016 and 2018.

In 2018, Daniel attended the Jaeger-LeCoultre Polaris launch event in Zurich, Switzerland. He said “this wonderful watch is inspired by an iconic diving watch from the 50’s-60’s, the Memovox, I love the design of it, that cool 60’s look, love it!”.

Recently, Daniel Bruehl was nominated in the category Best Performance by an Actor in a Limited Series or Motion Picture Made for Television at the 2019 Golden Globes.

Jaeger-LeCoultre is proud to congratulate Daniel for his second nomination at the Golden Globes and to welcome him in Geneva for the SIHH 2019.

Award winning actor Daniel Bruehl has been involved in many critically acclaimed film and television projects and has garnered international recognition for his talent and versatility.

Next, Daniel will shoot Kingsman The Great Game, directed by Matthew Vaughn and starring Ralph Fiennes, Charles Dance and Rhys Ifans. In April 2019 he will shoot “The Angel of Darkness”, which is a new limited series based on the sequel to best-selling author Caleb Carr’s “The Alienist”. In addition in the near future Daniel Bruehl and Luke Evans are reuniting for an untitled dramedy feature inspired by the 2006 French film Mon Meilleur Ami.

In summer 2018 Daniel’s production company Amusement Park Films produced the film My Zoe which he featured in together with Julie Delpy and Gemma Arterton. My Zoe, which is written and directed by Julie Delpy, is the fascinating and confrontational story about the lengths to which a mother’s love goes for her child.

In March 2018, Daniel has starred as activist ‘Wilfried Böse’ in drama feature Entebbe, opposite Rosamund Pike. Based on a true story, the film follows four hijackers who commandeer an airplane bound to Entebbe, Uganda in 1976 to free dozens of Palestinian and pro-Palestinian prisoners in Israel. On Netflix, Daniel can be seen in J.J. Abrams God Particle, about a group of astronauts fighting for survival. Julius Onah directs, and the feature also stars David Oyelowo, Gugu Mbatha-Raw, Elizabeth Debicki, and Chris O’Dowd. The Bad Robot picture was released worldwide by Netflix in February 2018.

On 22nd January 2018, Daniel took on the lead role of criminal psychologist ‘Dr. Laszlo Kreizler’ in the premiere of new TNT/Paramount series The Alienist, based on the international best-selling novel by Caleb Carr. The psychological thriller is set in 1896 in New York City where Daniel’s character works as a specialist in deviant behaviour, known as The Alienist (one who studies mental pathologies). Luke Evans and Dakota Fanning also star, with Jakob Verbruggen directing and Cary Fukunaga serves as an executive producer. The series was released globally by Netflix in April 2018. The Alienist was nominated for 2 Golden Globes, one of them for Daniel as Best Actor and won an Emmy out of 6 nominations. Furthermore The Alienist is nominated for the Saturn Award.

In 2017, Daniel stared in The Zookeepers Wife, opposite Jessica Chastain. Daniel took on the role of ‘Lutz Heck’ in the feature set against the savage backdrop of the Nazi invasion of Poland in the second world war. Directed by Niki Caro, the film follows the story the Zoo Keepers in Warsaw Zoo, ‘Jan and Antonina Zabinski’, who helped save hundreds of people and animals during the Nazi invasion.

In 2016, Daniel took on the role of ‘Zemo’ in the summer blockbuster Captain America: Civil War, starring alongside Scarlett Johansson, Chris Evans and Robert Downey Jr. in the third adaptation of the popular Marvel comic book Captain America. He also starred in thriller feature Colony as ‘Daniel’ opposite Emma Watson.

Since its creation, Jaeger-LeCoultre has made precision an art form in its own right, balancing skills and artistry with sophistication and esthetic finesse. In keeping with the inventive spirit initiated in 1833 by its founder Antoine LeCoultre, the artisans of the Manufacture create collections which have been at the forefront of fine watchmaking: Reverso, Master, Jaeger-LeCoultre Polaris, Rendez-Vous and Atmos – this rich legacy built by the Grande Maison over centuries serves as a constant source of inspiration in ever so pushing the boundaries through unprecedented timepieces.